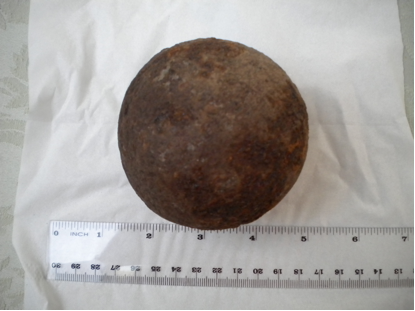 Allowing for clearance it could have been fired from a 4 inch diameter cannon?

A possible explanation might be that it was near to an area where there was some civil war activity. Mentioned in John Burman’s The Story of Tanworth in Arden published in 1930 page 4. 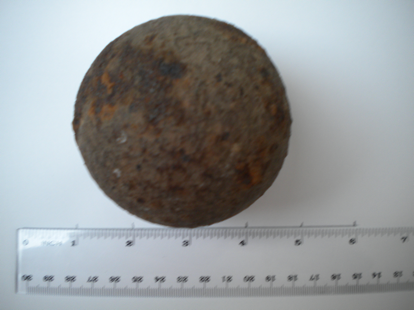 “Peaceful Tanworth, without a record of any strife within its bounds, must nevertheless have known the meaning of civil war, as skeletons of men and horses with swords and cannon balls and other instruments of war have been unearthed at the Leasowes in close proximity to the church. These would appear to denote the site of a skirmish during the Wars of the Roses or the days of Cromwell. Tanworth’s Lords were implicated in both”.

There is further evidence of Civil War activity in the region following Prince Rupert’s attack on Birmingham in 1643. Rupert’s policy was to burn and destroy the houses of Parliamentary supporters.

In Philip Tennant’s book “Edgehill and Beyond” it appears that many large houses were not fortified against attack. They were very vulnerable at a time when pillaging took place, some more than once, by enemy troops, often acting on direct orders. It seems that any house was fair game for either side. Troops needed feeding and so they took what they could.

Beoley was one such house that had been plundered more than once. It was the home of catholic landowner William Sheldon. It had escaped notice until 1643. It could have been seen by Puritans as a subversive papist cell.  It appears to have been on the instructions of John Bridges of Warwick that 50 or 60 fat beasts that belonged to a catholic neighbour, were taken from a meadow by Beoley Park. It seemed to have been a concerted campaign against this catholic district. Parliamentarians at Coughton Court also took away five cart loads of bedding, hangings, carpets, furniture, brass and pewter belonging to the Throckmortons.

Following an attack on Aston Hall a large force commanded by John Bridges attacked Beoley House with great guns. They converged on Beoley from Coventry, Warwick and Coughton, quartering at Henley, Tanworth, Studley and Wootton Wawen. There was talk of a siege in which a royalist major and several captains were taken prisoner and the house was stripped of its contents. The soldiers put all the Irish to the sword before burning the house to the ground.

They returned again to their bases and on the way they demanded more provisions, stealing again from Rowington, Knowle and Henley. At Tanworth  some celebrated with a New Year Feast of 6s. worth of geese at Henry Hunt’s expense. Atrocities of this kind by both sides were becoming more common.

Hawksley Hall, Kings Norton was one of the catholic homes of the Middlemore family, which had been converted into a parliamentary garrison. Its soldiers frequently took quarter in nearby villages such as Tanworth, Packwood and Lapworth where they resorted to property blackmail demanding money from owners to prevent their houses from being burnt to the ground.

So, the evidence seems to suggest that there was certainly civil war activity in and around Tanworth and it seems likely that the cannon ball was from that conflict. 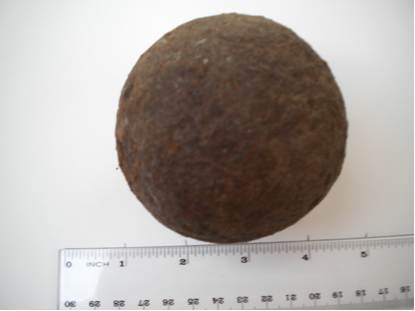